Hi, My name is Biko! 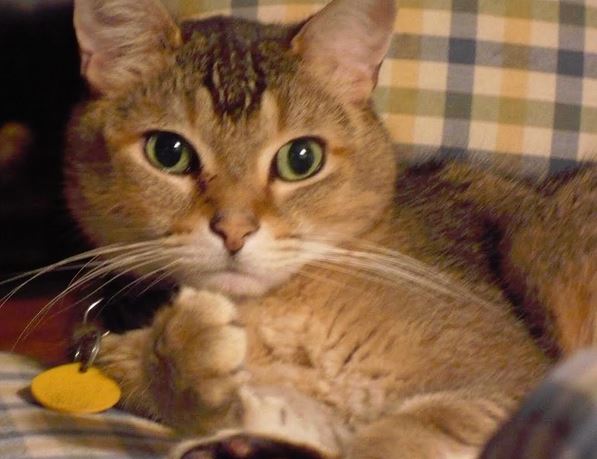 I am an absolutely stunning Abyssinian mix with incredible green eyes. I am very sweet and affectionate, but a little shy at first. I am 14 years young, very healthy, neutered and up to date on my shots.

I am looking for a quiet home with one or two laps to keep warm. I am being rehomed because my owner has developed severe cat allergies. I will bring all my kitty stuff along with me. Please offer me a home today!

Age of Pet: 14 yrs
Spayed/Neutered?: Yes
Health Problems: No
Up To Date on Vaccinations: Yes
Gets along with cats: Unknown
Gets along with dogs: Unknown
Accessories Included: Everything we have for him, including an automatic food dispenser.
[/one_half_last] 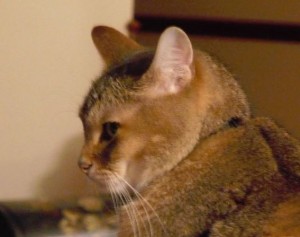 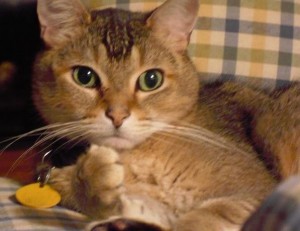 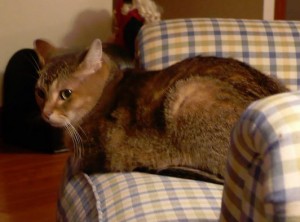 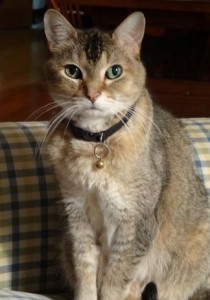 He is shy, but he attaches to one or two adults he lives with (our experience) and is a total lap-cat. He is active, playful, loves routine/rituals, good tempered, teachable. I need to mention he is declawed in forepaws only. He is not destructive, and loves to lick plastic bags.

Two-story home with lots of windows, a closed-in porch he enjoys, a basement he hangs out in when we are gone.
We are two adults, no other pets, mostly adult visitors.

Just the two of us live here; our children live out of town.

He loves to run thru the house occasionally; he eats dry cat food & hairball treats and has an occasional can of tuna but doesn’t like most wet cat food. He likes to chase his imitation mouse, use his scratching box and carpet, and is a fool for catnip and catnip spray.

One morning he wanted to jump into my lap at the breakfast table although he knew that isn’t allowed. I blocked him but put my hand down to pet him instead. He wasn’t happy with that so he boxed my hand instead, then STOMPED off. He looked over his shoulder, turned around and came back to my hand and batted me one more time “for good measure”, and stomped off again! He’s so funny!

Why is Biko Being Rehomed?

He was originally my daughter’s cat, but we took him when she went out of the country for her job. The intention was to give him back when she returned to this country, but she developed a huge allergy to cats while she was away (she has so many allergies to so many things). I have to be careful to keep him out of the room she uses when she visits.

Also, we are going to be doing a lot of travelling and he wouldn’t take well to being boarded, nor do I think it would be right to leave him alone for such long periods.

Biko’s Perfect Adoptive Home Will Be:

I think he would prefer to be the only pet (he has never been with other animals). Also, he has never been around young children except for a visit by our 2-yr-old grandson. The child frightened him and he hid the rest of the time they were with us. That is what he does – he hides when outsiders come in and only comes out when they leave. You never have to worry about a workman letting him out because he stays in a hidey-hole till they leave. He also wouldn’t bother visitors – he hides.

Also, because he will probably be scared and upset at having a change in his life, he would need someone who would be willing to be patient about his warming up to them – not try to cuddle him right away – to let him come to them. That is what we did when we brought him here from Massachusetts.

He has been a good cat, no bad habits, good disposition and a cuddler. I just could not take him to a shelter – he needs a home.

And I would like to hear at least once that he is okay.