Hi, My name is Mabel! 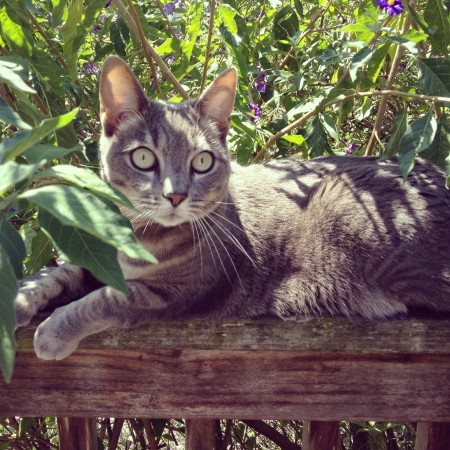 Mabel is really unique little cat. She is absolutely stunning, with amazingly huge, light green eyes. She has the most endearing personality. She loves to cuddle and is very sweet natured. She is also a bit of a klutz! She is easy to please and loves nothing better than to chase a simple string or plastic bag.

She’s very fond of catnip, and enjoys bird watching, calling to them from the window, but never hunting them.

Mabel is just 6 years old, and is spayed, up to date on her shots and very healthy.

Mabel’s owner is in such a difficult situation! She loves Mabel so very much, but severe cat allergies within the home have made it necessary to look for a new home for Mabel. She is dearly hoping to find someone who will cherish this adorable little cat as much as she does. Someone who will spend time with Mabel and keep her safe, happy and healthy for the rest of her life.

Mabel will be rehomed along with her cat stuff, including food, a litter box, catnip (of course!) and preventative flea medications.

Mabel’s perfect new home will be quiet and comfortable. She will do well in an environment where there is not a lot of commotion, people coming and going, or other pets to compete for attention with. She would dearly love to be the cherished center of someone’s universe.

Health Problems: Yes
Up To Date on Vaccinations: Yes
Gets along with cats: Yes
Gets along with dogs: Yes
Good with Children?: Unknown
House Broken or Litter Trained?: Yes
Crate Trained?:
Accessories Included: we can provide a few months worth of prescription food, we can give a litterbox (cleaned) if wanted, catnip, a box of flea treatment.
[/one_half_last]

Mabel is an adorable sweet cat who loves catnip and being outdoors and playing with string. She would prefer a piece of string or rope or plastic bag instead of toys. She likes to drink water from the bathtub and chew on plant leaves. She is not the smartest cat i’ve ever met, but is a loving girl who would want to sit on your lap and snuggle when she feels like it. She can be picked up easily and likes to sleep in warm places like on top of the stove and it makes her feel secure to have safe places to hide when she is feeling stressed. She is curious and a little clumsy and likes to chirp at the birds outside instead of chasing. She is more of a beta not an alpha cat. She can get shy though but is ok around strangers.

A two bedroom apartment in San Francisco that isn’t very large but has a sunroom and back deck where Mabel likes to sleep and go outside. She unfortunately can’t go into the bedrooms due to allergies.

2 people live in the apartment as well as a 17 year old female cat Leah and a 6 year old chihuhua Lulu. Mabel gets along fine with the other pets, they don’t fight, they all really leave each other alone, but Mabel might be jealous of Lulu since she is allowed in the bedrooms. She tries to play with Leah who is not a willing participant. In some ways she might be ok with another cat who likes to play and they could become buddies, but probably not dogs. I don’t think it would be a deal breaker if she was in a home with another cat but not multiple cats.

She loves string and ribbon and catnip, watching the rain from the porch and chirping at the birds. She likes to go outside and run up and down the hallway and likes to pounce on Leah the older cat. She likes to lick plastic bags, jump into the fridge, suitcases, boxes, bags, and likes to nap in her box. She likes her prescription food and doesn’t really go for treats especially, but does like tuna as a treat.

Mabel has a lot of personality and is quirky, is kind of clumsy and a little gawky and looks like she is wearing foot pajamas. She likes to sit on the edge of the bathtub and drink water while a human is taking a bath and one time she leaned over to drink water and fell in!

Why is Mabel Being Rehomed?

Both members of the house have developed cat allergies in the past few years unfortunately and although they aren’t debilitating, they definitely make an unhealthy environment for cat and humans. Due to allergies, we haven’t closed the cats out of the bedrooms when they were allowed previously, and Mabel likes to get under the bed or crawl under the covers, and can’t give her as much attention to have her sit on our laps or snuggle and it definitely has stressed her out a lot. Stress and anxiety for other reason as well probably has caused her to urinate outside the litterbox and it has happened in the past every so often and was more frequent a few years ago, which coincided around when they were not allowed in the rooms and other apartment changes, but as of the past few months, she has urinated 1-2 times a week outside the box. We had a cat behaviorist come and had success with a lot of remedies, but they haven’t worked lately. We really can’t give her attention due to allergies, and we are also wanting to rehome the older cat because of allergies as well. We do not want to surrender them to a shelter, but have a home for them. Wanted to find Mabel a home first though.

Mabel’s Perfect Adoptive Home Will Be:

A family that can give her lots of attention as well as access to the whole house if possible (maybe not every room, but if she can go into bedrooms). Outdoor space if she could go in an out would be great. Probably no children or dogs, but other cats could be ok. A low stress environment with few changes, stability, and comfort.