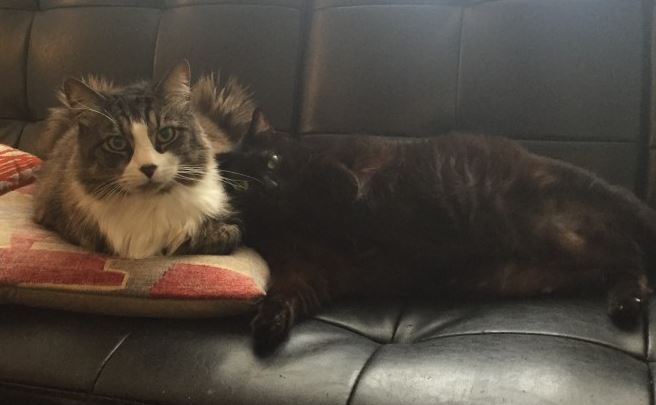 Black and Maine Coon male and female cat for adoption in Brooklyn, New York. Healthy, spayed/neutered, up to date on shots and clean and well behaved.

If you are looking for companionship in the form of a pair of sweet, fluffy felines, consider Selma and Woody. This pair of cats are like chalk and cheese; one pure black with green eyes – the other a long haired Maine Coon. Both cats are older; Selma is 16 and Woody 12. Both are very healthy.

Selma and Woody have been a bonded pair since they were adopted by their current owner, and would very much like to find a home where they can stay together. Both cats are healthy, spayed/neutered, up to date on their vaccinations and litter trained. They are very low-maintenance cats – well behaved and sweet.

While it breaks her heart to find them a new home, their owner has recently gone through a divorce, and simply does not have the time or resources to provide Selma and Woody with the safe, happy home they both need and deserve. She is traveling extensively due to work demands, and the cats receive very little time with her. They spend most of their time alone in her apartment, which is not an ideal situation.

Ideally, Selma and Woody would love to find a quiet home with a loving owner who has time to spend with them. Both cats prefer a calm environment where there is little coming and going. They would be the perfect companions for a senior, retired or work-at-home cat lover. The most important consideration for Selma and Woody is that they have a quiet home where they feel safe and loved.

Selma and Woody have been a “couple” since 2003. They are like a married pair – they would be lost without each other. They groom one another every day, and it always ends in a married couple fight at the end. But a few minutes later, they’re right next to each other again. They are quite self sufficient. Woody is a bit more needy – he likes lap time and tens to follow you around to see what you’re doing. Both cats love to join at sleep time. Bed time to them is the most precious together time. During the day, they’re living their married life with one another.

Please offer this precious pair a home today. They will add immeasurable love, joy and companionship to your life.

There is a $25 adoption/rehoming fee. Supplies will be included.

All About Selma (black) and Woody (Maine coon)

Age of Pet: Selma 16+, Woody 12+
Spayed/Neutered?: Yes
Health Problems: No
Up To Date on Vaccinations: No
Gets along with cats: No
Gets along with dogs: No
Good with Children?: Unknown
House Broken or Litter Trained?: Yes
Crate Trained?:
Accessories Included: A running water fountain and litter boxes. I also have a pet carrier I can supply. Food bowls, brushes. I am willing to provide funds to cover shots and whatever else either pet needs. I would like to microchip Selma and Woody so I can check on their location for a long time. I will miss them terribly, but feel it is not fair to keep them in my environment since I am not able to give them the life they deserve.
[/one_half_last] 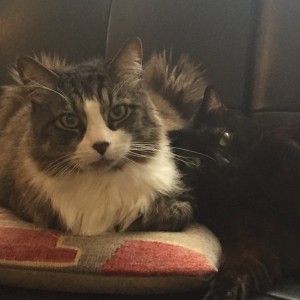 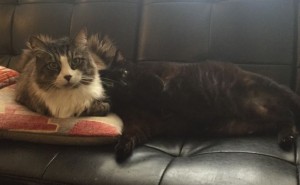 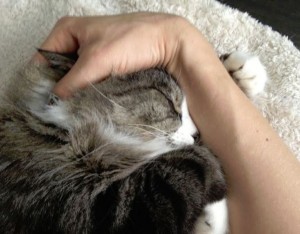 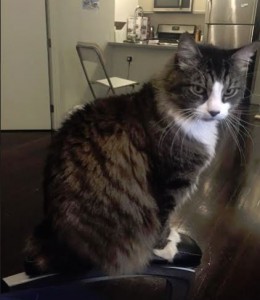 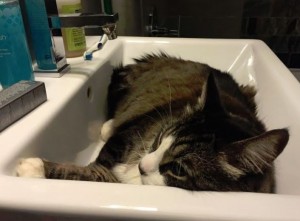 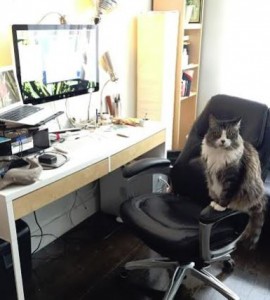 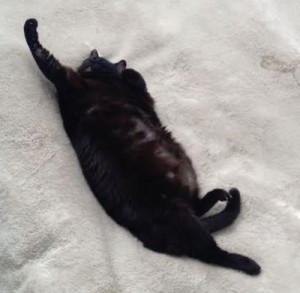 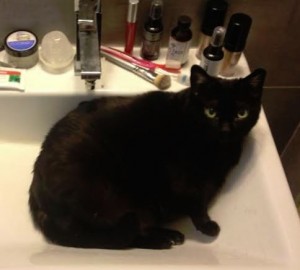 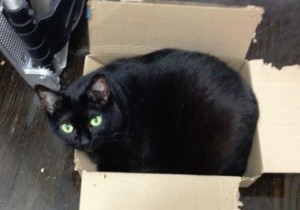 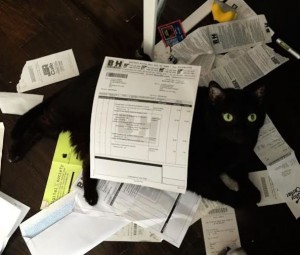 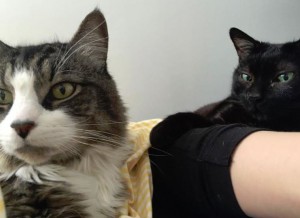 Selma and Woody have been a “couple” since 2003. They are like a married pair – they would be lost without each other. They groom one another every day, and it always ends in a married couple fight at the end. But a few minutes later, they’re right next to each other again. They are quite self sufficient. Woody is a bit more needy – he likes lap time and tens to follow you around to see what you’re doing. Both cats love to join at sleep time. Bed time to them is the most precious together time. During the day, they’re living their married life with one another.

I live in a studio apartment. Pretty devoid of entertainment opportunities for them. But- like I said – they don’t need much. Presently they share the space with Ned, a cat they never got along with. It’s a fairly small space for three cats and a human, but probably large enough for them without Ned. A studio apartment on the third floor. Woody, in particular, is easily frightened by sounds in the hallway – so I have put a sound damper under the door, which has been sufficient to make him feel safe enough. He still notices when there are people in the hall, but no longer runs and burrows under the comforter like he used to.

For?both of them, one another is all they need to be quite happy. They both like a little people time, but not a great amount. They groom each other every day – and they love curling up in bed with me. Woody loves his lap time in front of the computer, and Selma loves getting a good brushing. Selma’s got a passion for breaking down cardboard with her teeth and shredding paper into tiny bits. She is very happy in a pile of paper she can be free to tear into little pieces or a cardboard box. Woody likes to get inside tiny spaces – so inside of boxes – with Selma on top.

Selma was the first cat we got. When I first saw her, out on the street, she was less than a year old, and didn’t even look like a cat. I got near her and she started yelling at me “MEEOW – MEEW – MEEEOW” – I spoke to her and she followed me home. She had ringworm so bad, more than half her hair was missing. Turns out she had ermines – which is why she was yelling – she couldn’t hear. She also had a lung infection and worms. She had it all. It took about six months of treatment and patient care to get her to a point where she looked like a cat again.

Woody was sitting in the snow, beside the door of an ATM in Red Hook Brooklyn when my husband first saw him. He went to get me for dinner, and said – if that cat is still there when we get back, he’s ours. Well – he was. I walked over to Woody and said “would you like to come home with us?” – and he followed me and hopped in the car.
When we first put Selma and Woody together, it was right after we brought both of them back from the vet where they got spayed and neutered. Selma was a bit more out of it than Woody. As soon as he was fully conscious, Woody started trying to play with Selma’s tail. It was moving, and he was attacking it. She gave him a solid whooping about six or seven times – scratches on the nose, body slam, her whole arsenal of martial expertise. Seconds after he’d had his ass handed to him, he would completely forget that happened, apparently, and started trying to attack her tail again. By the end of that day, Selma gave up, and we found them curled up together – and they have been best buds ever since.

A peaceful and respectful owner who will allow the two to stay together and live their fairly self sufficient life with one another. Preferably no outdoor space or other pets. Selma’s sight is pretty poor at this point – she can see, but not very well – so new environments are a challenge for her.
She needs a source of running water at all times.