Hi,  My name is Pinkberry!

Pinkberry!
If you’ve never seen a dog named “Pinkberry” then you’ll soon have trouble forgetting this one!  This 6 year old Catahoula Leopard Dog has one of those faces that is so expressive, that you’ll always know what he’s thinking.  Most of the time he’ll have you ready to laugh out loud, or nod your head in agreement with his unspoken comments! Pinkberry is “Mr. Personality”.
He is a very active high energy dog who loves to play, but he’s having a hard time getting used to life with an unpredictable young child in the house (she’s just 16 months).   He loves the people in this home, but his nerves are very jumpy trying to stay out of the way of a little girl that adores him.  He would love a lot more exercise and time outdoors, but his current home has no yard.
He currently likes a walk on the leash about 3 times a day and would probably love a yard where he could spend more time outdoors. He currently has a dog walker who helps out, so he’ll need a home where somebody is willing to give him lots of exercise and play with him.
He’s very friendly with familiar adults, and once you get to know him, you’ll wonder how you ever lived without him.  He won’t mix with other dogs or cats though.

Pinkberry is perfectly well behaved in the house, but he’s intent on being the only pet in the house.  He won’t mess up or chew up your house as it’s his home too.   He’s not a biter at all, but he will growl if he feels threatened or surprised.  Even if he’s been attacked or charged by another dog, Pinkberry has great restraint.  He is also crate trained and will go to his crate on command. (His crate will come with him along with food, bowls and bins.)
His owners really feel sympathy for him and his constant efforts to adjust to life with a toddler.  They feel that this adorable playful dog needs a less stressful home with active adults or a family with kids old enough to play and exercise him, while respecting his space.
Oh! Pinkberry is afraid of water! Don’t mix him up with a retriever! If it falls in the water, he’s not going in after it!  He’ll trip over his own feet trying to avoid getting wet.

Age of Pet: 6
Spayed/Neutered?: Yes
Health Problems: No
Up To Date on Vaccinations: Yes
Gets along with cats: No
Gets along with dogs: No
Accessories Included: We’ll provide his crate (he’s crate trained; will go to his crate on command), his food bins, leashes, and two dog beds.
[/one_half_last] 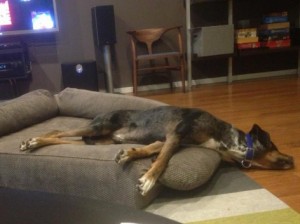 Being pinkberry is hard work 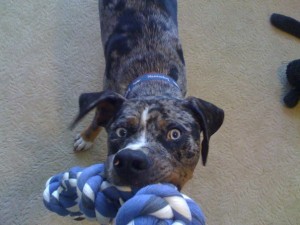 Aw! Come on and play with good old Pinkberry! 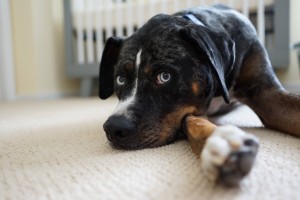 Did somebody say “walk”?! 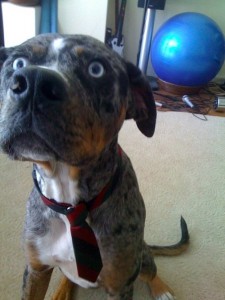 Is my tie straight? 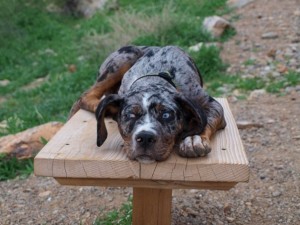 I am keeping one eye on that water…from here. 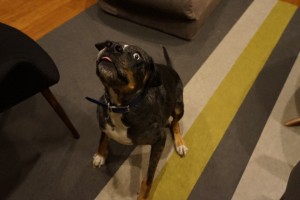 Pinkberry (Pinky) lives in our townhome, has a dog walker, likes to go to parks, but does best on leash at parks. He loves walks– goes around our neighborhood 3 times a day.

My wife and I have a 16 month old daughter. We’ve been married 3 years, and have lived in the Bay Area for the past 6.

Loves tugging games and stuffed animals. He’s not into balls or swimming.

Pinky doesn’t like water. One evening after sunset, I took him to a nearby park that has a creek. Pinky was having a blast running around, and then ran straight towards the water. I looked at my wife, thinking that he’d have to stop, right? But he didn’t– apparently he couldn’t see the creek in the twilight, and he just jumped straight in. He was horrified– it was his first real experience in the water. I had to pull him out and take home a soggy, sad pup. We thought it was hilarious though!

Why is Pinkberry Being Rehomed?

Pinky was great with our daughter until she started walking. Now, he’s having trouble adjusting to her moving around unpredictably. He’s started growling at her, and running to his crate to avoid her.

We can tell that this isn’t a good situation for either of them. Pinky has perfect bite inhibition– he’s never bitten anyone, even when other dogs have charged at (or bitten him) aggressively. But he’s a reactive dog, and he seems increasingly uncomfortable around her.

My daughter loves dogs, and loves Pinky– she gets upset when he growls at her. We’d like her experiences with dogs to remain positive, and we want Pinky to be comfortable in his home environment.

Pinkberry’s Perfect Adoptive Home Will Be:

Pinky would work best in a home with no other pets. He’s high energy, although it’s declining somewhat as he ages. I think he’d be happiest with a lot of outdoor space to roam– one of our issues is that we have a town house with no yard, and I think being cooped up hasn’t been the best for him.