Hi, My name is Terry! 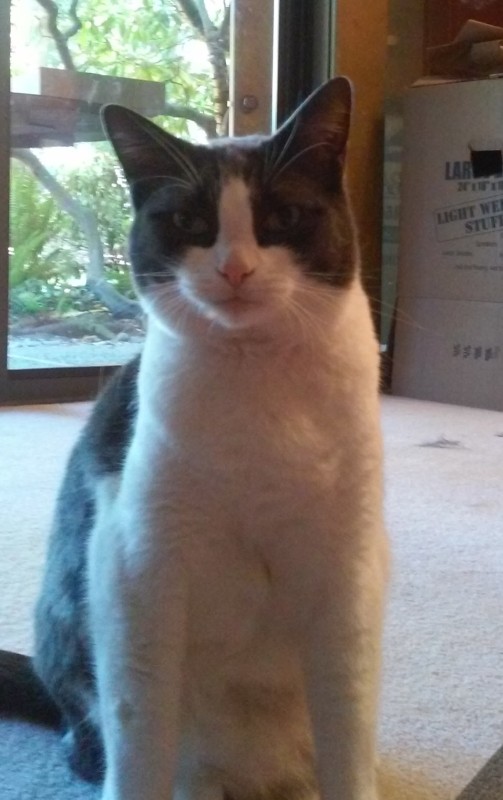 Terry is always looking dapper in his grey tuxedo!

Terry is and adorable grey tuxedo?cat who, along with his sister cat, Hope, is looking for a loving family to cherish him. He is just 6 years old, very healthy, neutered and up to date on his shots.

Terry has been described by many as the sweetest cat alive. He has an amazing personality – so cuddly and interested in human interaction. He and his sister are very much in love with each other. They spend much of their time together, groom each other, and sleep cuddled up in a “ying/yan” bundle of fluff. To separate these cats would be tragic, so finding a home together is essential.

These sweet cats are being rehomed by their owners, who are heartbroken to have to make this very difficult decision. Unfortunately their son has developed cat allergies, and their financial situation has changed, making it very difficult to provide the essentials for their cats. They are dearly hoping to find a loving home for Terry and Hope where they will continue to receive the high level of love, care and attention they deserve.

Please consider offering this precious pair a home today. They will be rehomed with their supplies, and the rehoming fee to adopt both cats together is just $25. These are “ready-to-love” cats and very special. 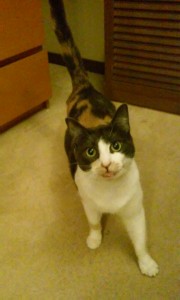 Mellow, curious, playful with his bonded litter mate. Fairly easy-going. He and Hope (his littermate) have been described as “the sweetest cats” by multiple people. With humans, he’s cuddly, and can be a bit shy with strangers. He enjoys snuggling with me and will sit in my lap and purr for hours.

Busy and boisterous–we have a 2 and 4 year old. We live in an 1800 square foot condo. Terry and Hope stay inside, but like to sit by our sliding glass doors to watch the world go by. It’s a fairly spacious home. There are lots of good spots for sleeping, they like the couch and recliner best, but have had to be pretty flexible with where they go since we had the kids

My husband Matt and I have been married for almost 10 years. We have two children, James and Meredith ages 4 and 2. We are originally from the Midwest and moved to Seattle close to 15 years ago. Matt works as a physical therapist and I am a speech-language pathologist. We love being outdoors and are quite a physically active family.

Terry enjoys chasing a feather that’s attached to a stick by a string. He’ll sometimes chase a laser beam toy. He likes to watch activity out the window. He’s a champion napper (like most cats). He likes to wrestle with Hope (when she’s interested) and also to play chase from time to time.

The most heartwarming thing about Terry is that he is so closely bonded to his litter mate Hope. They truly are best friends and often will groom each other or snuggle up to sleep together. Also, he’s a great lap cat and will sit and purr and keep your legs and lap warm for hours if you’re able to hold still!

Why is Terry Being Rehomed?

A sad combination of our older son showing some allergic reaction to the cats as well as the growing realization that it’s a financial burden for us. To care for these cats appropriately, meet their needs for good food, litter, and ongoing well-cat care it just doesn’t work for our family. Our expenses are such that we can’t provide for them the way we want–and have been making it work, but that combined with James’s allergy has tipped the scales for us. This has been a very difficult decision.

Terry’s Perfect Adoptive Home Will Be:

A family that is informed about the financial responsibility of caring for two cats. A family that enjoys indoor cats who are fairly mellow, but can be playful if they want. A family that appreciates cats and wants their warm companionship for a long time. It is my hope and prayer that Terry and Hope can go to a forever home. They’ve been wonderful pets for 6 years and it pretty much breaks my heart to give them up, so I hope they can go to a family that will feel lucky to have these two goofballs.

Terry an Hope must be kept together and should never be placed in two separate homes. This is imperative.